Every year, one of the leading causes of vision loss in the United States goes undetected and untreated among nearly 25% of older adults. Age-related macular degeneration (AMD) can rob people of their sight and, up until recently, has been detectable using only structural diagnostic eye tests. In the coming decades, the number of people with AMD is expected to more than double, impacting more than 22 million people in the U.S. alone.

The ability to diagnose and treat AMD at its earliest stages may help more patients preserve their quality of vision.

What Is Age-Related Macular Degeneration (AMD)?

As a chronic, progressive disease, age-related macular degeneration (AMD) is the leading cause of adult blindness in developed countries. It occurs when fatty deposits accumulate in the retina and block absorption of nutrients, such as vitamin A, necessary for normal cell function.

AMD affects the part of the retina responsible for central vision, called the macula. As the macula deteriorates, it becomes increasingly difficult to read, recognize faces, and see in dim light.

Cholesterol deposits accumulate in the macula years before drusen are visible, making drusen the tip of the iceberg in AMD pathology.

Before drusen are visible, an invisible layer of cholesterol builds up between the pigmented layer of the retina (RPE) and the elastic layer of Bruch’s membrane. These cholesterol deposits — basal laminar (BLamD) and basal linear (BLinD) — cause oxidative stress and inflammation, hindering nutrient transportation to photoreceptor cells.ii As photoreceptor cells die, it becomes harder for the eyes to adjust to darkness, and night vision declines. This dark adaptation impairment is the first sign of AMD.ii

Prior to pivotal research conducted at the University of Alabama Birmingham, the Alabama Study on Age-Related Macular Degeneration (ALSTAR), AMD was staged as early, intermediate, and advanced. Thanks to the groundbreaking findings of this investigation, we can identify a subclinical stage of AMD.

While no one knows exactly what causes age-related macular degeneration, there are a few factors that put older adults at risk for developing this condition.

Stages and Symptoms of AMD

From subclinical to advanced AMD, all stages of the disease are the manifestation of the same underlying pathology

AMD, especially early on, can progress gradually and without pain. Even when early symptoms are detected, they may not be connected to AMD until after the condition has advanced. For this reason, it’s essential to be aware of what the subclinical, early, intermediate and late stages of age-related macular degeneration entail as well as the symptoms associated with these stages.

Diagnosing the earliest stages of AMD can present a challenge when patients often have good corrected visual acuity and the retina appears normal upon clinical examination. Consequently, a routine vision test may not raise any suspicion of the disease.

Subtle yet progressive, night vision difficulty is the earliest symptom of AMD. Often presented as problems seeing at night or reading in dim light, impaired dark adaptation function is the first biomarker of AMD — with impairment taking place at a subclinical level at least three years before drusen are visible.ii

No pigmentary abnormalities are apparent upon examination at this stage, and if drusen are detected, these are <63 μm.

Most people do not experience adverse symptoms or vision loss in the early stage of AMD, but night vision problems are often reported. Though no pigmentary abnormalities are apparent upon examination, medium-sized drusen (>63 μm and ≤125 μm) are present. Symptoms of increasingly impaired dark adaptation include:

At this stage, some people may see a blurred spot in the center of their vision. In addition to night vision difficulties, these patients may also have issues with contrast sensitivity. Some pigmentary abnormalities may be observed and at least one druse >125 μm is present.

Other intermediate AMD symptoms could include:

Insidious by nature, the symptoms experienced early in the disease may dramatically worsen. At this stage, vision loss becomes noticeable due to geographic atrophy (GA) or choroidal neovascularization (CNV).

Additional signs that you may have late-stage AMD may include:

From subclinical to advanced AMD, all stages of the disease are the manifestation of the same underlying pathology.

Nearly 85% of those who develop age-related macular degeneration have the dry form. Dry AMD causes you to slowly lose your central vision as the macula gets thinner and drusen accumulate.

In exudative AMD, abnormal blood vessels grow under the retina to aid nutrient transport to the macula (choroidal neovascularization or CNV). These vessels may leak fluids such as blood, potentially scarring the macula. Wet AMD causes you to lose your vision faster than dry AMD.

Using AdaptDx Pro™ to measure dark adaptation function — in conjunction with clinical examination and imaging — may enhance the clinician’s ability to diagnose AMD at its earliest stages. With earlier detection and treatment of AMD, we can begin treatment with the goal of delaying or preventing the onset of vision loss caused by this chronic, progressive disease. 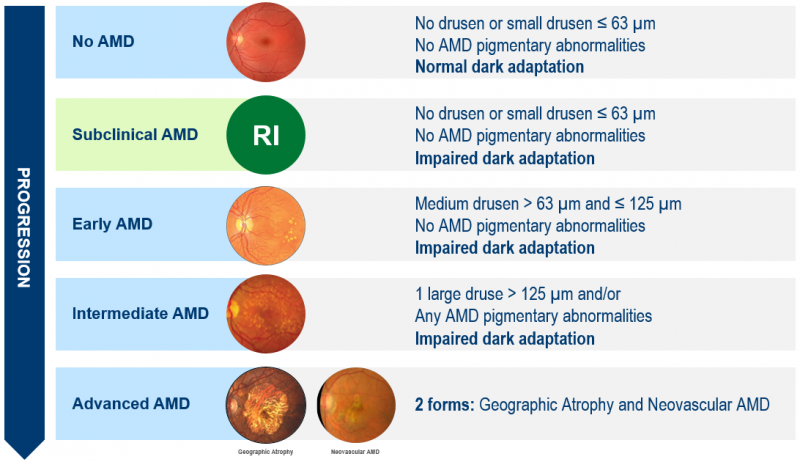 Using AdaptDx Pro™ to measure dark adaptation function — in conjunction with clinical examination and imaging — may enhance the clinician’s ability to diagnose AMD at its earliest stages. With earlier detection and treatment of AMD, we can begin treatment with the goal of delaying or preventing the onset of vision loss caused by this chronic, progressive disease.

The AdaptDx is especially useful for optometrists and general ophthalmologists who see many patients with “normal” clinical exams, since it can help you identify subclinical AMD up to three years before clinical onset. With the AdaptDx, you will be in the front line in detecting these patients and will be able to carefully monitor and treat those with subclinical AMD. 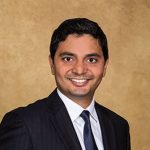 Even with annual eye exams and the latest imaging tools, AMD patients are still under-diagnosed. Take action to preserve the vision of your patients with the help of AdaptDx Pro™. The AdaptDx Pro™ has the power to measure dark adaptation, which can be useful in detecting AMD. With treatment, your patients may delay or reduce the risk of vision loss.