When I look back at the past 20-plus years of my career, perhaps the most significant change in the management of optometric patients has occurred in the area of age-related macular degeneration (AMD).

Proactive management of AMD has been under-served by optometry

For decades, I’ve felt that proper proactive management of AMD has been under-served by optometry – a crucial gap in care, considering AMD is the leading cause of vision impairment and blindness in Americans age 65 or older. My mom and grandmother were both diagnosed with AMD, and it affected our family. From that standpoint, it’s personal. This is something I’m passionate about.

When I began practicing in the late 1990s, there was very little a medically trained optometrist could do for a patient diagnosed with AMD. Our role was to monitor a patient with dry macular changes for years and refer them to a retinal specialist – only after they entered the wet form of the disease. Even with frequent check-ups, patients lost significant vision prior to seeing a specialist. Then and now, I’m sure I’m not alone in considering these the “dark ages” of AMD care.

Dramatic changes in the role of optometry in AMD treatment

This dramatically changed after the release of the Age-Related Eye Disease Study (AREDS) findings in October 2011. The study found that nutraceutical supplementation can reduce the progression of AMD by about 25 percent for patients at the intermediate stage of the disease. For the first time, optometry had a role in the treatment of AMD patients: by prescribing these nutraceuticals, we could work with our patients with the hope of slowing disease progression and preventing irreplaceable vision loss. The paradigm had shifted from one of “watch and wait” to one of “diagnose and proactively treat.”

Still, proactive management of the disease only meant that we could attempt to prevent further vision loss for our patients – but only after we discovered the presence of drusen to diagnose AMD. At that point, some irreversible vision loss might have already occurred. It was as if we were beginning the race from far behind the starting line.

It was the Alabama Study on Early Age-Related Macular Degeneration (ALSTAR study)ii that gave us the most significant finding in the proactive treatment of AMD: that poor dark adaptation is a biomarker for the detection of subclinical and early stages of the disease. Participants in this study were tested using the AdaptDx® dark adaptometer – and those identified as having impaired dark adaptation were two times more likely to have developed drusen three years later.

Furthermore, as published in Investigative Ophthalmology Visual & Scienceii, the Diagnostic Sensitivity and Specificity of Dark Adaptometry for Detection of Age-Related Macular Degeneration study evaluated dark adaptation speed via an AdaptDx Rapid Test (max duration of 6.5 minutes) proved these assessments to be highly sensitive (90.6%) and highly specific (90.5%) to AMD. The study found the Rapid Test for dark adaptation is a highly accurate measure of dark adaptation impairment associated with AMD and is useful in the detection of the disease.

For optometrists like myself, frustrated by the lack of options for preventing vision loss caused by AMD, it was crucial to implement this AdaptDx testing in our own practices. By testing a patient’s dark adaptation, we are able to use these results as part of a comprehensive evaluation to help diagnose AMD and begin preventative treatment before the disease progresses to more advanced stages.

The Diagnostic Sensitivity and Specificity Studyii had shown that 6.5 minutes was the magic number. If a patient’s eyes needed more than that time to recover from the bright light, the patient had impaired dark adaptation. And with 90% sensitivity and specificity that meant the patients had AMD. Since that study optometrists have been able to use this information as part of an AMD diagnosis – and begin preventive treatment even sooner.

How dark adaptation testing has improved in recent times

Still, recent studies have shown that optometrists and ophthalmologists alike miss the signs of AMD nearly 25% of the time.ii Knowing this, MacuLogix made dark adaptation testing even more accessible with the introduction of the AdaptDx Pro®, guided by Theia™. This new headset allows optometrists to measure their patients’ recovery time from bright light to darkness, the Rod Intercept® (RI®), clearly and objectively. This helps us evaluate and provide increased preventative care with the goal of delaying vision loss caused by AMD.

When I can diagnose subclinical AMD in my own patients, I’m grateful that the field of optometry has progressed to this point – that less of my patients will end up like my own grandmother, suffering vision loss because of lack of treatment for AMD.

Backed by 20 years of clinical research, AdaptDx Pro® is a revolutionary testing method.

Knowledge is power when it comes to AMD care

It seems apparent that as more of our eyecare colleagues become knowledgeable about the incredible new technologies available to them, the risks of blindness caused by AMD can be considerably reduced. The gift of sight is precious, and preserving it is a noble pursuit. Time is of the essence. The proper medical management of our AMD patients will assure us many more restful nights, knowing that the dark ages of AMD are forever behind us. 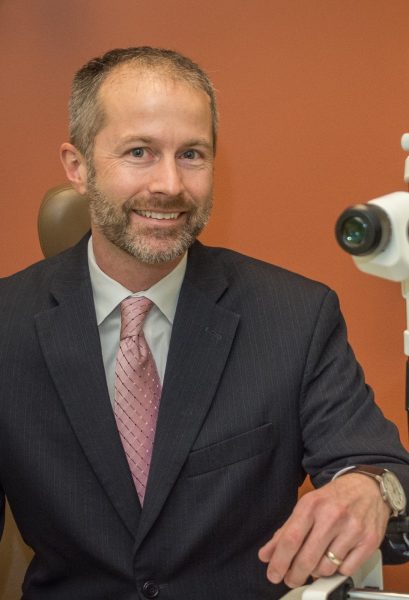 Dr. Timothy Earley joined Medina Vision Centre in 1998. He was born and raised in Honesdale, PA and earned his Bachelor’s degree in Biology/Pre-Med from the University of Scranton. He earned his Bachelor’s degree in Visual Science and his Doctorate in Optometry from the Pennsylvania College of Optometry. Dr. Earley is a national speaker and consultant on age-related macular degeneration, specialty contacts and practice management.

Connect with Dr. Earley on LinkedIn: